The Haettelihof under the direction of Mr Schumacher is a treasure at the edge of the City of Constance, a Demeter farm with mother cattle keeping, a wild fruit collection, some goats, some chicken and sheep. The farm offers to people the possibility to immerse in the simplicity with all their senses. This offer is addressed to school classes and kindergartens. Also the customers - who buy the excellent meat - regularly get an idea of the agriculture, the landscape and animal keeping on-site.

On the side line, Mr Schumacher and Mrs Paluch started the farming business in 2000 with four cows. The farm grew with passion into the present day diversified living project with animal keeping, pedagogical offers, landscape preservation and nature conservation maintenance. 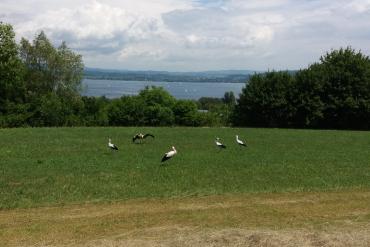 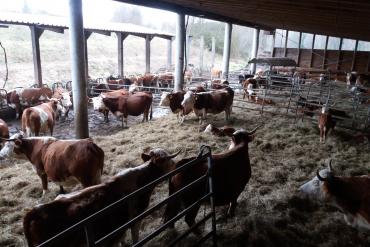 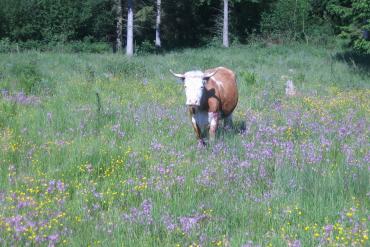 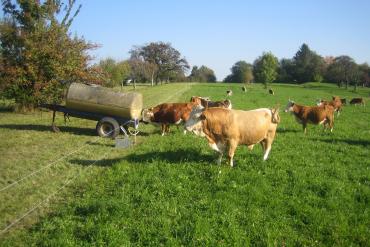 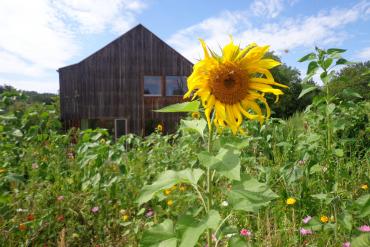 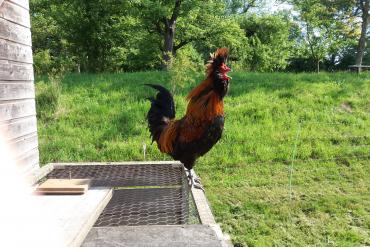 Country
Germany
Farm area in hectar
60.00
Date of establishment of the farm
2000
Date since when the promoter owns/rents the farm
2000
Farm description

On the side line Mr Schumacher and Mrs Paluch started the farming business in 2000 with four cows. The present farmhouse was founded in 2006.

As recognized Demeter enterprise, more than 60 hectares of grassland are cultivated today. The objective is to sustainably maintain and to secure, through an environmentally compatible use, the different grassland types. A significant component to reach this goal is the extensive grazing with cattle of the race "Hinterwald" - one of the endangered ancient breeds. A species-appropriate animal breeding is self-evident at the enterprise, and so is the specific feeding with specially produced hay called Öhmd and grass silage. The animals do not receive food from arable land such as cereals. As a result, the cattle grow more slowly  and will not be so heavy – their growth is simply closer to nature.

The enterprise is located at the edge of the City of Constance at Lake Constance.

Mr Schumacher has leased lands since 2000, but these were not of interest to other regional farmers. These are green areas with hedges or trees, that partly have a very uneconomical cut. But they are suitable for the grazing. Particularly so when several parcels can be aggregated at the edges.

The enterprise utilises 450 parcels in a real division area today these have been aggregated into 70 field strokes.

Besides the well-known agricultural incentives and potential state programmes Mr Schumacher received additional funds for the fences and the grazing from the landscape preservation association Constance. From the total of 60 ha of grassland, 25 ha are extensively grazed, the remaining lands serve for the production of hay and Öhmd. Grass silage is not produced in the enterprise.

Enough time is given to the meadow flowers to blossom and seed. Only this way, the historically present blossom structure remains preserved in natural grassland. The meadows are cut only twice a year - the first time not before beginning of June. The herd comprises today 18 mother cows, a bull and 20 young animals. Here are also 16 pension animals at the farm and at the pastures.

In the summer months the cattle live solely at the pastures. From autumn until spring, they are then in the stable. The animal to be slaughtered is personally delivered to the partner butcher. By 2018, the slaughter has to be implemented at the farm. The finished packaged meat products are sold exclusively to private households from the farm.

Since September 2014, the Haetteli farm also seasonally offers apple juice and apples from high-stem trees as well as walnuts from the trees around the farm.

More than 250 high-stem trees are located on the lands of the Haetteli farm, from which around 180 apple and pear trees still produce fruits. The other trees still serve as habitat on the lands and will not  be replaced until they fall down. Every year, 5 - 10 new fruit trees are planted.

Further on, 120 birds nest boxes shall be installed in 2018 on the enterprise estates.

The whole concept also includes possibilities to experience this agriculture first-hand. Firstly, there is the learning station farmyard for school classes and kindergartens. Furthermore, Mrs Paluch offers therapeutic courses at the farm, for those for whom the animals and the proximity to nature play an important role.

The enterprise operates according to the Demeter criteria and is strongly regionally oriented. The focus is on the individual subsistence also on the regional common welfare.

Through this kind of agriculture, the enterprise contributes to:

- Promotion of the landscape value;

"One acts as enterprise with one's system in the landscape and society".

"That the landscape is as it is, is important generally and in particular for the production and marketing of valuable products. Also one should cherish and preserve the landscape!".

"The tendencies and wishes of the director must fit to location X and Y and to the local possibilities!".

"It is not harmfully if one can work. But working only is also not helpful. An entrepreneur must think forwards!".

The Haetteli farm offers space to come into contact with agriculture, landscape, food and nature. Depending on the interested group - school class, kindergarten, clients or course participants - there is a wide offer at the farm.

To open all the senses and to gather experiences at an own pace is the main focus of Mrs Paluch and Mr Schumacher.

The farm is repeatedly used by different schools as extracurricular learning station (www.lernort-bauernhof-bodensee.de).

Based on the clear fundamental principle of the close to nature economies, landscape conservation and preservation business opportunities result not only in the sector of the direct sale, but also in the pedagogical and therapeutic sectors. The location of the farm close to the city also supports this development. These possibilities are consequently followed and used by the enterprise.

The learning station farm yard has been developed in a way that a significant added-value for the region would also be created.

The holistic concept promotes the enterprise itself, the region and the landscape. It also deepens the relationship of the community to the nature. Depending on the season, various herbs are collected, hedges cut, animals fed, etc., and the enterprise offers these activities to children.

It may sound trivial, but is a very important encounter for the young people in our time.

Mr Schumacher is very well trained in agriculture, economy and psychology. He regards himself very strongly in the sectors marketing, conception, communication and transparency.

His diploma thesis "Justification model of non-buyers of organic products" in 1997 points towards the fundamental orientation of the farm. The director questions in greater depth in order  to give answers with coherent concepts.

He is in permanent contact and experience exchange with the customers and asks for their opinion. In doing so, he stays on the pulse of time.

Furthermore he is open for cooperation.

- The farmer used and uses his high level education to set up a farm based on ecologic and traditional principles of farming - starting from zero. Do you see any outstanding aspects of your daily work to be shown and highlighted to the local community?

- The direct link to the local community is important for the whole concept - resulting in selling the products of the farm and offering further services on farm. Are you in contact with your local community?

- To reach this level of hectares and farming business, the farmer started with renting marginal grassland pieces. Today, he has built up valuable structures for the business from ecological and from single-enterprise economic perspective. Is there an abandoned, unconsidered agricultural land in your region? Could you imagine farming there in an adapted way?